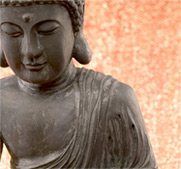 This thorough Western training is balanced with influences from Native American, Buddhist, Taoist, Hindu, Muslim, Jewish and Christian wisdom and healing traditions. The Buddhist traditions, particularly Zen, are the most influential. A week-long meditation retreat and intensive on Buddhist psychology with Thich Nhat Hanh in 1997 profoundly confirmed his personal beliefs and experience and set in motion a dramatic alteration in his approach to personal growth and healing. The writings of Alan Watts and Krishnamurti and the contemporary teachings of Eckhart Tolle and Gangaji both strongly influence and parallel his own conclusions and practice.

Originally academically trained in cultural anthropology, he has always sought to understand individual human circumstance within larger cultural and evolutionary contexts. It was during these studies that he first encountered the millennial genius of the French theologian and anthropologist Tielhard de Chardin whose vision of humanity’s evolutionary journey into consciousness he shares. With a nod to de Chardin, he often refers to his teachings and work as The Omega Journey.